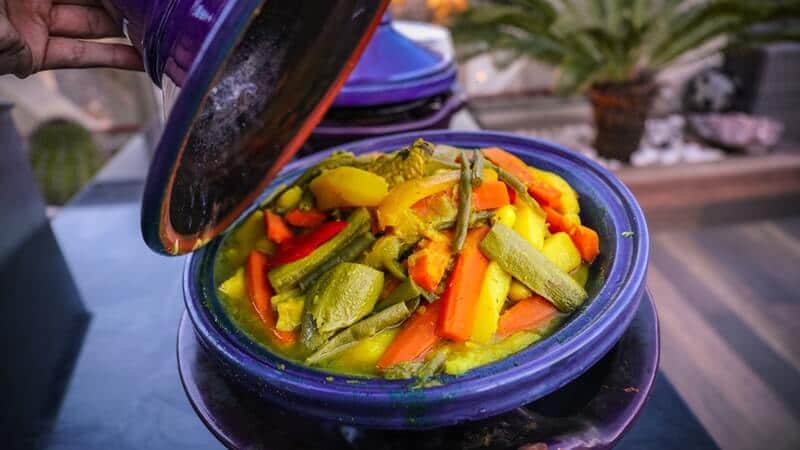 In this article, we discover together the irresistible and delicious Moroccan gastronomy and the variety of dishes. In fact, many people put visiting morocco on their bucket list. This is because of the hospitality of Moroccan people, bewitching places to go, and the great food. There are many charming and attractive places to visit in morocco that will astound you such as historical sites, sandy beaches, high Atlas, deserts, Kasbahs, gardens, etc.

An overview of the Moroccan gastronomy

Moroccan food is the most famous food because Moroccan cuisine serves irresistible tasty plates. You cannot visit Morocco without tasting its food. In fact, this country is considered one of the best destinations to enjoy delicious dishes and plates. Moreover, Moroccan cuisine is a bit of a mix of African, European, and Mediterranean cuisines and. Moreover, Moroccan food uses different types of spices that enhance the flavors of the food. In fact, when a person tastes it, he becomes addicted to it. Moroccan food is healthy, not too chic, and stays true to traditions. It mainly uses olive oil, garlic, onions, vegetables, dried fruits, and juices.

Each city in Morocco has its own flavor, which takes your words at the first bite. For example, the flavor of a tagine prepared in Marrakech is different from that prepared in Agadir. From the various type of Moroccan dishes we cite, the couscous of meat with seven vegetables, chicken tagine with olives and candied lemon, meat tagine with vegetables or prunes and apricot, tajine of fish, and Bastilla based on seafood.

The tagine is a traditional Moroccan clay plate known for its conical shape. This form helps keep food moist and warm and to enhances the flavor. Tagine, bread, and mint tea are basic Moroccan foods; these are the most served on the Moroccan table.

There are many types of chicken tagines, it depends on the type of vegetables and fruits we use. In addition, the spices have a huge effect on the flavors of these tagines.

The chicken tajine with preserved lemon and olives is famous in Morocco. Before starting to cook this dish, you could prepare special ingredients: meat, vegetables, and spices. Marinate the chicken by putting the chicken in the spice rub and coat the chicken with a spice mixture. Let the chicken sit for two hours in the spices. By spice rub, we mean the mixture of many spices; grounded ginger; salt; paprika; ground black pepper; Saffron; finely chopped parsley and coriander; chopped garlic; lemon juice; preserved lemons; and olive oil. Saffron is what makes this tagine special and delicious.

The preparation of the tagine begins by heating the olive oil in a tagine. This olive oil will help in making a large sauce in the tagine. Then, add the chopped onions over medium heat until the onions are softened and golden. We sprinkle a little salt and ground black pepper over the onions. Add the chicken pieces skin-side down, fry for a few minutes on each side, and cover rub them with the remaining spices. Add the olives, reduce the heat, and cook twice an hour. Garnish the tagine with candied lemon and a mixture of parsley and coriander and leave it to simmer for another fifteen minutes. This tagine is served with Moroccan bread and a salad of fruits or vegetables. This kind of tagine translates the deep Moroccan gastronomy.

Tagine of meat with peas and bottoms artichokes

Cooking the tagine requires patience. Poultry takes about two hours to cook, while beef; the goat, or lamb can take up to four hours. Let the tagine simmer slowly and try not to lift the lid to check the food to keep it moist. The Moroccans cooked the tagine in braziers over charcoal, to make sure the heat was low enough.

Always start by marinating the meat in the mixture of rubbing spices, garlic, parsley, coriander, and olive oil. Then, let sit for a few minutes or hours to be sure that the meat absorbs the flavors of this mixture. First, mix the meat with the chopped onions. Second, put it in the tagine broth and stir several times to brown the meat on all sides. Finally, cover the meat with water and reduce the heat to the middle. If the liquids start to boil, add the saffron, peas, and the artichoke bottoms and cover the tagine until the peas and artichokes are soft and liquids become a rich sauce. This dish serves tagine directly with bread and green salad. The pea and artichoke bottoms can be replaced with prunes and apricots or vegetables like carrot, potato, and pumpkin.

What you need to know in mathematics to get started

Two tips on how to avoid epidemics danger