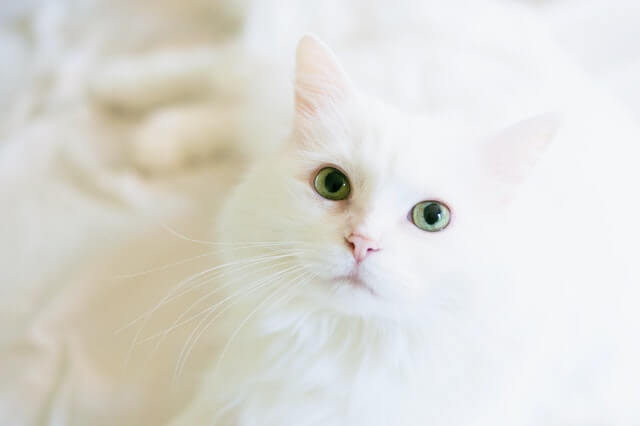 The Angora cat is one of the oldest breeds, its origins dating back to the history of its native Turkey (ancient like the Maine Coon cat). It is also arguably one of the prettiest with its elegant body and long silky coat. He was probably the first long-haired cat to arrive in Europe, but he was long preferred to the Persians with the most powerful morphology.

Although it has been suggested that Angoras descend from Pallas’ manul or cat, most zoologists agree that the fundamental differences between the two make this possibility impossible. A much more credible explanation is that the long-haired gene appeared by mutation or by crossing, in a group of cats that possessed this morphology known to breeders as foreign. The limited crossbreeding possibilities outside the group allowed the long coat to take hold; we then obtained a breed of furry cat with a foreign morphology.

When Turkish Angoras were imported to France and England in the 16th century, they aroused much admiration, but it was not until the middle of the 19th century that attempts were made to identify the differences that separated them from others. . long-haired cats from Persia and Russia. An English writer in 1868 described the Angora as

a beautiful variety with a silvery coat, silky texture, longer around the neck but also on the tail.

The breed faced competition from Persian and Russian cats; Persian eventually becomes the preferred variety. Any resemblance to the Angora was forbidden by the breeders. By the turn of the 20th century, the breed had again become virtually unknown outside of Turkey.

An interesting aspect of Angora’s history is that while Angora got its name from the ancient city of Angora (Ankara), a pure variety developed in the area of ​​the great Lake Van. This variety is now known in Great Britain as the Turkish cat; he also called there, as in certain associations of North America, the Turk Van. These cats are red and white, with quite rare markings in cats: the red color is limited around the ears and on the tail (it is now called the Van pattern). In their native region, they are highly regarded cats, not only for their beauty but also for their habit of bathing in shallow streams and waterholes they may encounter. 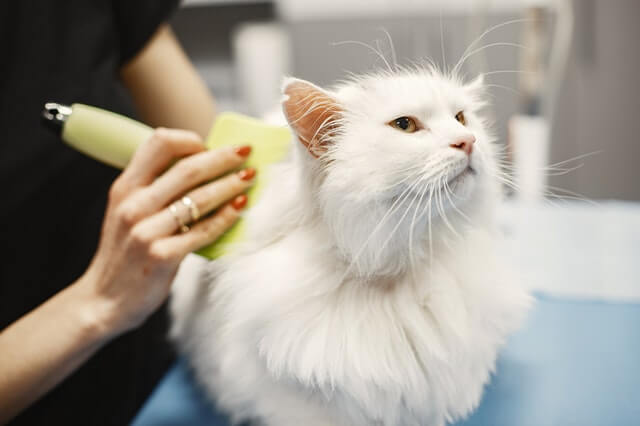 The Angoras of Turkey, while still thriving in their homeland, became extinct in the western world until after World War II. But in the fifties and sixties, cats from Turkey were brought to North America, Sweden, and Great Britain; they were the starting point for the Angoras of Turkey, North America and Europe, and the Turkish Cat. In the United States, Turkish Angoras were allowed to compete in the early 1970s, although the CFA restricted entry to whites. Now, as in Europe, a much wider range of colors is accepted by all associations; black, blue, and closed colors, tabby and calico.

In Great Britain, the situation is less clear. The Turkish Cat only has access to championship classes in red and white colors. In 1977, however, a breed known as Angora was granted the right to registration. It is identical to the Turkish Cat, but it exists in the full range of colors, including chocolate and lilac, and its meow is close to that of Siamese. He is the result of a breeding program aimed at recreating the breed with these original traits, rather than relying on its regeneration from cats imported from Turkey.

Differences between Angoras and Persians

The most striking differences between Angoras, Turkish Cats on the one hand, and Persians on the other hand are due to the quality of the coat, the shape of the head, and the general morphology. The angora is long and sinuous, the head is elongated and pointed, it has large ears. The Turkish chariot is of a less foreign type, its head is wider and shorter, the ears smaller, but both are quite different from the Persians who have a larger head, smaller ears, and are generally more robust. aspect. They have the same long, silky coat, without the woolly undercoat that tangles and knots.

The breeders of these back-to-basics angoras strove to obtain the same coat and the same morphology as the breed known in Turkey; Turkish angora and van cat breeders tried to keep as many original characters as possible. The differences between Van cats and Angoras in other regions are likely the result of natural evolution rather than genetic manipulation by Western breeders. Angoras and Turkish Cats are natural breeds and breeders are unanimous in wanting to keep their character.

Character and habits of angora

Angoras’ pleasant character was noticed by a 19th-century writer and is just as true today as it was then. Kittens are precocious, they open their eyes earlier than puppies of Persian breeds, they engage in mock fights while still under the mother. Females from the line of these found Angoras have been shown to be very fertile, giving large litters, but four kittens per litter is a more normal number. In the summer they go through a very intense molting period, so in some cases, they almost look like shorthair cats. But their winter coat grows back very quickly, and the fact that they don’t have a downy undercoat makes them much easier to care for than Persians. They once had a reputation for loathing the handling of judges during shows, now breeders have managed to get much fewer nervous lines. Turkish cats and angoras are pleasant and elegant companions.

The health benefits of honey

Some electronic applications are worthless