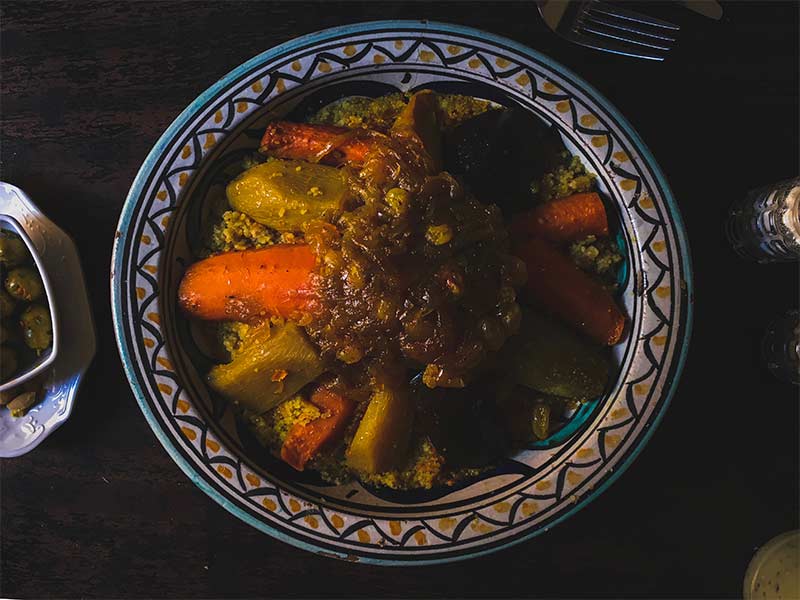 Bastilla and couscous are the most popular foods in Morocco, France, and northern Africa. The Bastilla is a prestigious dish and often served during a wedding ceremony or a special family event; while couscous is the most popular in Morocco and probably 90% of families eat this dish every Friday. Here we give an overview of two special Bastilla and couscous dishes, based on seafood and seven vegetables, respectively.

Couscous of meat with seven vegetables

Morocco will mesmerize you with its countless and multi-cultural traditions that stand out in a striking way in its cuisine and its dishes. For this reason, if you request a couscous recipe in Morocco, you will receive many. Sweet and juicy meat couscous with seven vegetables garnished with a caramelized onion and a raisin garnish, Tfaya, still the famous staple dish, and it takes a long time to be cooked.

Cooking couscous requires a couscoussier (pot). Inside of this latter, we brown meat or chicken with olive oil, chopped onion, and tomato. In parallel, we add spices such as salt; ground black pepper; ground ginger; turmeric; and pinch saffron over medium heat. Stir the ingredients until your sauce begins to form. Then add the chickpeas which are soaked in water overnight with a bunch of cilantro and parsley and 1.5 liters of water. To cook well, reduce heat to medium-low and simmer for one hour. 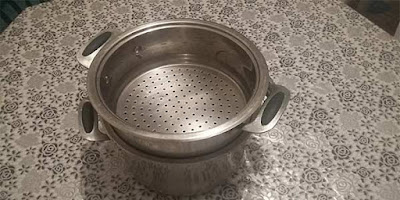 The last step is to unmold the couscous with steam into “Gasaa”. To that purpose, use water, smen, and butter. Mix and rub the grains with your hands to make sure there are no lumps. Before placing the couscous on the steamer basket, add the pumpkin, zucchini, and two peppers.

The couscous is served in Gasaa by placing hot couscous in it and garnishing with meat and vegetables and pouring a few cups of broth over the couscous to moisten it. As for the Tfaya, it is optional, chopped two large onions, and place it in a deep pan with salt, butter, and olive oil. Once the onions have become soft and translucent, add two cups of vegetable and meat broth, raisins, cinnamon, a pinch of saffron, and honey, and simmer over low heat until liquids reduce. This Tfaya can be used as a garnish for couscous.

Because Morocco borders the Mediterranean Sea and the Atlantic Ocean, many Moroccan dishes include seafood and fish; The seafood Bastilla is one of them. The latter is served at Moroccan weddings and special events because this plate itself is a celebration of flavors and textures: sweet on the inside, crisp on the outside, hot, sour and tangy.

Seafood Bastilla is a Moroccan seafood pie that contains calamari; white fish, shrimp; Chinese vermicelli wrapped in “Warka” dough sheets; filo pastry; and garnished with shrimp. Boil the squid, white fish and shrimp in water with salt for a few minutes. However, we start with the squid because it takes a long time to cook. After that, the fish should be removed from the water and placed in a clean place. In the same water, boil the Chinese vermicelli for five minutes. Mix the ingredients with black pepper, chili, saffron, paprika, garlic, cumin, olive oil, soy sauce, lemon juice, and chopped cilantro and parsley.

Heat a large pan medium heat melt two tablespoons of butter, and add the mixture of ingredients. In order to have a good fish cooking, stir several times until the fish is soft. Brush each sheet of dough with melted butter mixed with ground black pepper. Place the dough sheets around the baking dish and two sheets in the center; brush the edges with egg yolk. Put the trim back in the center and make sure to enclose the trim. Pour melted butter over the pie and bake it until it becomes crisp and golden.

How to differentiate the types of honey? The most three innovative tips on children’s education

We provide you with the latest breaking news and videos straight from the entertainment industry.
Contact us: contact@yoursite.com