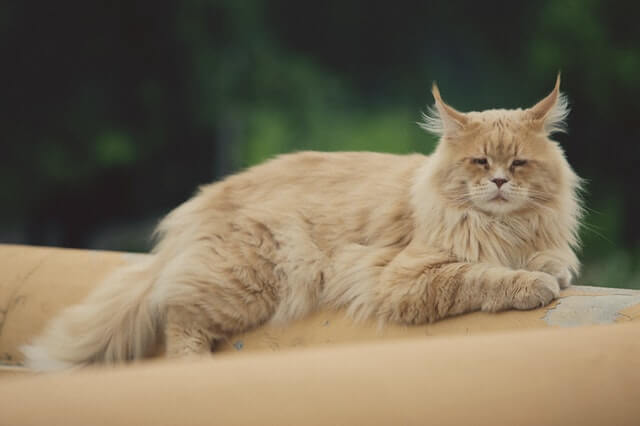 The Maine Coon is one of the oldest natural breeds in North America, believed to originate from the state of Maine. Several legends are attached to its origins; it is said, for example, that it was born from the love of wild cats and raccoons (which is biologically impossible). This belief, together with its feathery tail and its color, is indeed close to that of the raccoon. Another story goes that Marie-Antoinette, at the time of the French Revolution, would have sent her cats to the United States, thinking of joining them one day.

Maine coon: a cross between angoras and short-haired cats

Most breeders today believe that the breed was born from crosses between early Angoras (probably introduced by sailors from New England) and needy shorthair cats. It is certain that the Maine Coon was already sedentary more than a century ago, and that it was a beautiful and robust breed of domestic cats, skillful hunters who limited the population of mice on the farms of New England. . Their harsh coat and morphology allowed them to withstand the harshest winters, they had also become one of the fattest breeds although it is doubtful that the sometimes cited figure of 18 kg was ever reached.

The size of the Maine Coon cat 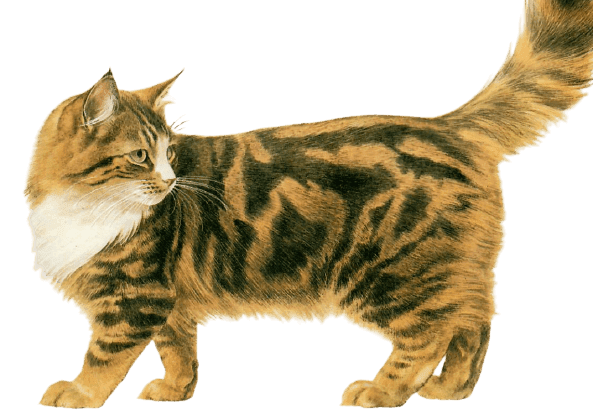 Tall and long, males frequently weigh up to 7 kg, females rarely more than 5 kg. Their coat is long and flowing, it is relatively thick and bushy, shorter on their well-developed collar emphasizing their elongated head with a square muzzle, Maine Coons are magnificent and powerful cats.

The Maine Cat in the Madison Square Gardens exhibit

Maine Coons were popular participants in early Boston and New York cat shows; One of them won the 1895 exhibition at Madison Square Gardens. Their success faded with the arrival of the more flamboyant Persians sent by British Shepherds, but as pets, they continued to reign supreme in the northeastern states. It is not difficult to understand why it was claimed that these enduring, agile, and independent cats had raccoons among their ancestors, nor why they were regarded as precious companions, for all these years, until the time when the cat lovers began to take an interest in it. again and have them participate in exhibitions. 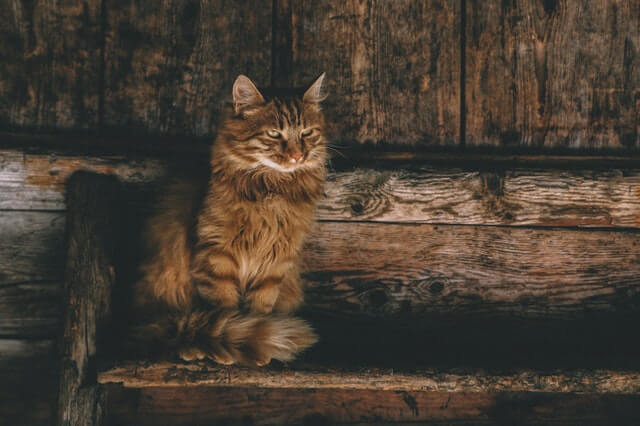 Throughout their history, there have never been any official restrictions on Maine Coon patterns and colors (with the exception, however, of chocolate, lavender, and the Siamese pattern). Therefore, there is a wide range of colors, including mono-color, bicolor, tortoiseshell, tabby, tortoiseshell tabby, and ombré. The brown tabby remains arguably the most popular. Eye colors range from green, gold, and copper to blue.

Walleyes are also accepted and the show standards do not contain any restrictions on coat and eye color combinations. In fact, these represent only fifteen percent of the total points.

The Maine cat respects the criteria of the judges

The most important elements of the judges are the head, the trunk, and the fur. Maine Coons are slow-developing and may not reach the end of their birth until they are four years old. They are generally considered perfect pets, due to their habits and the fun games they indulge in. their coat is easy to maintain. The litters are generally not very large; the maximum being four kittens and the usual number two or three. Due to the variety of colors and patterns, many of these cats carry a diverse range of color genes, and it can happen that kittens in the same litter are very different from each other.

The Norwegian Forest Cat looks like the Main Coon 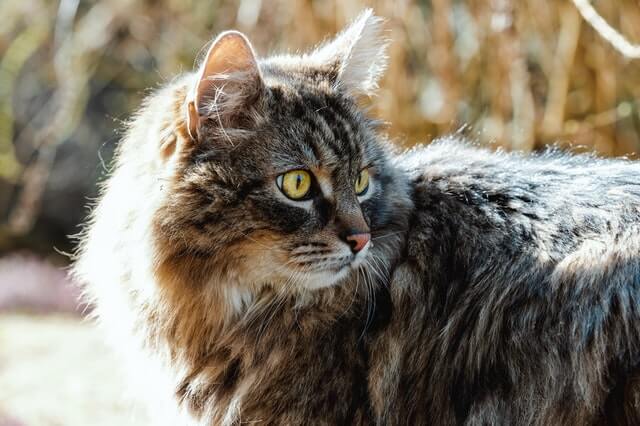 The Norwegian Forest Cat is very similar to the Maine Coon, it is still a very special Scandinavian breed since it developed in the cold conditions of Norway. Its origins are not known, but the same is true of the Maine Coon, being exposed for generations to a cold and humid climate has given it a thick coat, making it able to withstand the elements. The woolly undercoat retains body heat, while the medium-length guard hairs protect it from rain and snow. Necessity made him cautious, intelligent, quick and a good hunter. Its strong claws allow it to climb not only trees but also rocks.

It was from these hardy cats – some semi-wild, some large rodent exterminators on farms – that a group of breeders began in the 1930s to develop the breed. One of these cats was at an exhibition in Oslo before WWII, but the breed is much older. It is found in Scandinavian mythology, but the earliest written reference is in Norwegian fairy tales, collected and edited between 1837 and 1852. This cat is called a “fairy cat”, and is said to have had a long tail. and bushy. The interest of breeders in this cat resumed in the early 1970s.

It is different from the Maine Coon in that its hind legs are (ideally) slightly longer than the front legs. Another difference is the coat, which is thicker than that of the Maine Coon, but it poses as little maintenance problem as that of its cousin from across the Atlantic.

The first source of energy

How to invest in bitcoin without buying it directly?

The planet of Mars:10 important facts

How to protect yourself from cancer