In this article, we provide important information about the Russian blue cat. The exotic origin has always been very popular with cats, and blue is a highly sought-after color. It is therefore not surprising that two particularly striking breeds are, on the one hand, blue in color and on the other hand, have distant but diametrically opposed geographical origins. It’s the Russian blue cat.

The origin of the Russian blue cat

It is said to have come from a port in the White Sea, from where sailors brought it to Europe around the 1860s. The Russian blue cat was, in the early years of feline fashion, known as de many different names. Among these are “Blue Spanish”, “Archangel” and “Maltese”.

In an exhibition towards the end of the 19th century, all blue short-haired cats were included, regardless of their breed. The stocky, round-headed British type still won first prize, and interest in the thinner, narrow-headed Russian type had slowed considerably. In 1912, the British cat associations instituted separate classes for the British and the Russians, and the latter became popular again until World War II, which almost ended the breed’s extinction.

In the 1950s, Scandinavian breeders also developed the breed, growing a Finnish blue cat with a Siamese carrying the diluent gene (d) which is responsible for the color blue. British breeders decided to cross a blue point Siamese with Russian blue, they obtained cats of a very oriental type. The standards were then revised and it was not until 1965 that a group of breeders decided to return to the breed as it was in the pre-war years, the shape of the head circumscribed in a square. . , prominent muzzle, erect ears. In 1966, the standards changed, definitively, specifying that the “Siamese type is not desirable”. The most distinctive feature of the Russian blue cat has always been its short, soft, and silky coat, resembling the hair of a beaver or seal, and most importantly, a gray-blue where light reflects, giving the cat a shining silver. 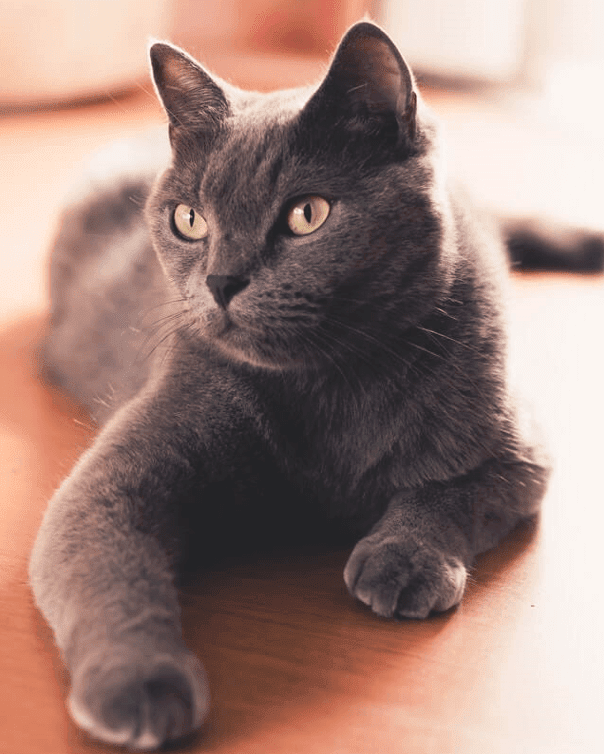 The Russian blue cat appreciates its calm. He prefers to stay away from the hustle and bustle. He turns out to be intelligent and very affectionate. However, you have to earn your trust: Russian Blue chooses very carefully who to spend time with. This silver paw is proud like a Russian and picky like a diva. He is shy and distant towards strangers. But Russian Blue is a loyal soul once sympathy is established. His high intelligence allows him to do amazing things on his own, like opening closet doors. Russian Blue is terribly fond of playing and at all ages. Cat toys should therefore not be missing in the house shared with Russian Blue. Despite his considerable jumping abilities, the Russian Blue is very careful: you won’t have to worry about broken porcelain when he goes exploring.

When he is a kitten, the Russian Blue is also a small tornado, but with age, his temperament will calm down.

Particularities: very sensitive, this cat is not recommended for beginners, needs sustained contact with its owner.

How to lose weight fast naturally

The origins of the domestic cat